Dignitaries and officials from near and far gathered in Salina, Kansas on Friday, October 14th to celebrate the grand opening of Great Plains Manufacturing’s new Construction Equipment (CE) Facility. Kubota Corporation Executives from Japan, as well as state and local government officials were in attendance.

The facility in Salina will help support growing demands for Kubota construction equipment in the United States, starting with the production of Kubota’s SVL65 compact track loaders.

First announced in 2020, the CE Facility was part of a $53 million expansion and included the renovation of an existing 750,000 sq. ft. facility that had been recently vacated by a major employer in the Salina community, a lightbulb manufacturer.

The CE Facility grand opening was commemorated with a tour of the new facility and a sake barrel ceremony – a Japanese tradition, similar to a ribbon-cutting, that symbolizes opening to harmony and good fortune.

Phase I of the project, including mass production of the Kubota SVL65 compact track loaders, was completed earlier this year. The Phase II expansion of the CE Facility will be a $124 million investment that will include the installation of an automotive grade eco-paint system with two paint lines: one for powder and the other for liquid applications. Expanded welding, assembly, and fabrication areas, and the construction of a building addition will increase production capacity and bring more jobs to the Salina community.

Phase II is expected to be up and running by mid-2024, adding about 200 more jobs to the area.

To read the full article as published by KSAL.com click here:  https://www.ksal.com/video-great-plains-kubota-celebrate-salina-opening/ 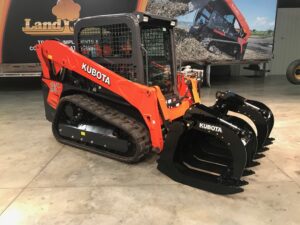